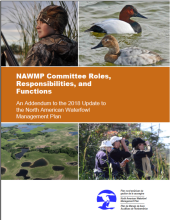 The recommendation in the 2018 Update to the North American Waterfowl Management Plan (NAWMP or Plan) to “Clearly define the roles and responsibilities of the Plan Committee (PC) and how it strategically structures itself and its functions…” provided direction to review and update the 2004 statement of Plan Committee roles, responsibilities and functions.

To accomplish this, the Plan Committee initiated a strategic planning effort at the Summer 2018 meeting in Ottawa, Canada focused on identifying actions to help achieve the goals and objectives of the 2018 Update. The results of this effort are summarized in a document entitled “NAWMP Committee Strategic Priorities and Actions.” A number of ranked, primary responsibilities for the Plan Committee were identified as well as some adjustments to its structure. Supporting discussion in the report provides additional detail and clarity around key roles and responsibilities of the PC, its functions, strategic priorities and actions.

This Addendum to the 2018 NAWMP Update replaces Appendix C: Institutional, Legal, and Administrative Authorities, Functions, and Arrangements in the Implementation Framework of the 2004 NAWMP Update.