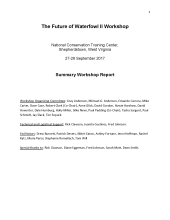 The Future of Waterfowl II Workshop, held at the U.S. Fish and Wildlife Service National Conservation Training Center in Shepherdstown, West Virginia on September 26 and 27, 2017, was a gathering of wildlife and land management professionals to help chart a path forward for waterfowl and wetland conservation in North America.

This is the final report of the workshop, outlining the full details of everything presented and discussed.

Document(s)
The Full Report on the Future of Waterfowl Workshop II2.11 MB 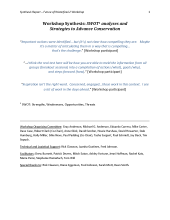 This stand-alone synthesis section forms a major product arising from the Future of Waterfowl Workshop II Report. The objective of this synthesis is to summarize dominant ideas and key messages emerging from the workshop presentations and discussions. Much of the information contained here was obtained from workshop participants during facilitated break-out sessions that focused on the issues of “Awareness and Public Engagement” and “Institutions and Integration”. During those sessions, participants identified the strengths and weaknesses of their organizations, then identified opportunities and threats associated with “Awareness and Public Engagement” and “Institutions and Integration”, and finally, generated ideas about how to use our strengths and overcome our weaknesses to take advantage of opportunities and ward off threats. Additional information was generated from comments provided by individuals who responded to the post-workshop survey of participants.

Combined with other sources, this information will be used to help guide the development of the North American Waterfowl Management Plan (NAWMP) 2018 Update and is expected to provide ideas for conservation initiatives over the next 3-5 years. 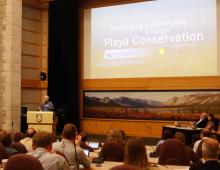 The following presentations were given at the Future of Waterfowl Workshop 2 and can be reviewed or shared with others.

In February 2015, the NAWMP Science Support Team (NSST) and Interim Integration Committee (IIC) met jointly in Memphis, TN, and began to explore ways of integrating objectives for waterfowl habitat and people, the latter including hunters, other conservation supporters and the general public.

Participants were exposed to approaches and efforts attempting to integrate habitat-human objectives and monitor responses and progress toward integration, and were actively engaged in generating and summarizing ideas.

Defining the “problem set”, i.e., explicitly specifying the linked habitat-people objectives and associated management decisions, was challenging. Yet, all groups managed to make progress, and identify trade-offs associated with decisions that could most benefit birds, people or both target groups.

Round 2 Workshops - Agenda, Presentations and Results

Seven Round 2 consultation workshops were held between September 2010 and February 2011. The first was held in conjunction with the Association of Fish and Wildlife Agencies annual meeting. Feedback from that workshop helped to modify the agenda and process for the remaining workshops. Those workshops - held in New Orleans, Denver (Dec. 7), Portland OR, Denver (Feb. 3), Edmonton, and Ottawa - followed a different agenda than the Grand Rapids Workshop. The agenda and powerpoint presentations used for those six workshops are attached below. (Grand Rapids results are further below.) Results from each of the four US and the two Canadian (but not Grand Rapids) include the TurningPoint slides, the compiled valuing exercise average, and the table discussion notes. The table discussion notes include suggestions for clarification of the fundamental objectives as well as suggested measurable attributes.

Workshop results from round 2 in Edmonton.

Workshops results from round 2 in Ottawa.

Workshop results from round 2 in Denver.

Workshop results from Portland, Oregon from the workshop held January 10-11, 2011.

Results from the December 7, 2010 workshop in Denver.

Results from the workshop in New Orleans on December 1, 2010.

Round 1 workshop input  from several flyways.

The first Round 2 workshop was held in Grand Rapids on September 30, 2010 in conjunction with the Association of Fish and Wildlife Agencies' annual meeting. Input from this workshop was used to modify the agenda for the remaining workshops.

Results of the workshop held in Milwaukee on March 22, 2010.

The Memphis workshop was held in conjunction with the NSST meeting the last week of January 2010.

Results from the NAWMP Workshop held in conjunction with the Adaptive Harvest Management Working Group in Portland, Oregon December 2-3, 2009