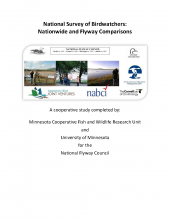 The North American Waterfowl Management Plan (NAWMP) was implemented in 1986 with the goal of maintaining abundant and resilient waterfowl populations in North America and sufficient wetlands and related habitats to sustain those populations (U.S. Fish and Wildlife Service and Canadian Wildlife Service 1986). In 2012 the planning committee, in consultation with stakeholders, decided to revise the NAWMP with additional goals to plan for changing times. The 2012 NAWMP Revision provides a new vision of waterfowl management that emphasizes a growing and supportive core of waterfowl hunters and an engaged conservation community inspired by waterfowl and wetlands.

To achieve this goal, NAWMP partners must engage both the traditional and waterfowl hunting community and broader stakeholder groups who are interested in waterfowl and the conservation of waterfowl and wetlands. To facilitate this engagement, the National Flyway Council (NFC) – in cooperation with the four Flyway Councils, the NAWMP planning committee, and non-governmental agencies – initiated the formation of a Human Dimensions Working Group (HDWG). This working group is tasked with obtaining and incorporating human dimensions information and approaches into migratory bird conservation programs, policies, and practices. To inform this task, three surveys – a waterfowl hunter survey, a birdwatcher survey, and a public survey – were administered in the United States. Similar birdwatcher and hunter surveys occurred concurrently in Canada. Separate summary reports are available for the U.S. general public, waterfowl hunter surveys, as well as the Canadian surveys (U.S. Geological Survey 2017; Patton 2021b; Harshaw 2018a, 2018b). This report presents results from the U.S. birdwatcher survey, and throughout the rest of this report refers to it as the National Birdwatching Survey (NBS).