Public Views of Wetlands and Waterfowl Conservation in the United States 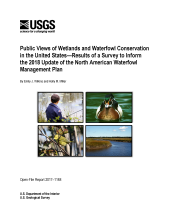 This report provides information from a general public survey conducted in early 2017 to help inform the North American Waterfowl Management Plan (NAWMP) 2018 update. This report is intended for use by the NAWMP advisory committees and anyone interested in the human dimensions of wetlands and waterfowl management. A mail-out survey was sent to 5,000 addresses in the United States, which were selected randomly in proportion to the population of each State. A total of 1,030 completed surveys representing 49 States were returned, resulting in a 23 percent overall response rate.

Document(s)
Public Views of Wetlands and Waterfowl Conservation in the United States8.11 MB