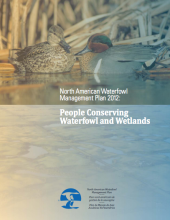 Over its first 25 years, the North American Waterfowl Management Plan (NAWMP) has become a model for international wildlife conservation. In large measure, this is because it has evolved with engagement of the broad waterfowl conservation community.  Previous Plan updates – in 1994 (when Mexico became a signatory), 1998 and 2004 – described abundant waterfowl populations as the Plan’s ultimate goal, pursued through large-­scale partnership­-based habitat conservation.

This 2012 Plan renewal is termed a revision to differentiate it from the previous updates because for the first time since its inception, we fundamentally re­examined the NAWMP’s goals. We developed renewed goals through extensive consultation with stakeholders, including Federal, Provincial/Territorial, State and non-­government organization representatives from the continental waterfowl management community.