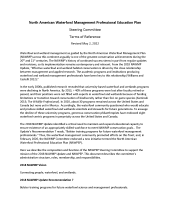 Waterfowl and wetland management as guided by the North American Waterfowl Management Plan (NAWMP) across this continent arguably is one of the greatest conservation achievements during the 20th and 21st centuries. The NAWMP’s history of continued success stems in part from regular updates and revisions, so its implementation remains contemporary and relevant. From the 2018 NAWMP Update, “Effective waterfowl and wetland habitat conservation is driven by the close relationship between management and applied research. The academic programs and institutions producing waterfowl and wetland management professionals have been key to this relationship (Williams and Castelli 2012).”

In the early 2000s, published research revealed that university-based waterfowl and wetlands programs were declining in North America. By 2013, > 40% of these programs were lost after faculty retired or passed, and their positions were not filled with experts in waterfowl and wetlands because of funding limitations or transition toward conservation of biodiversity rather than foci on game species (Kaminski 2013; The Wildlife Professional). In 2020, about 30 programs remained across the United States and Canada but none yet in Mexico.  Accordingly, the waterfowl community questioned who would educate and produce skilled waterfowl and wetlands scientists and stewards for future generations. To assuage the decline of these university programs, generous conservation philanthropists have endowed eight waterfowl-centric programs in perpetuity across the United States and Canada.

Here we describe the composition and function of the NAWPEP Steering Committee to support the mission of the 2018 NAWMP Update and NAWPEP. This document describes the committee’s administrative structure, roles, membership, and responsibilities.

For more details see the full document in the links.